Fight of the century: Wu-Tang vs. Michael Jackson

A tough decision awaits us Orlando-ians this Thursday: should we leave that 9 to 5 upon the shelf and just enjoy ourselves OR travel to the slums of Shaolin to see the M-E-T-H-O-D Man? I doubt this is a dilemma our town will ever encounter again - the face off between Who's Bad, the ultimate Michael Jackson cover band, and the Wu-Tang Clan, who ain't nuthin to f*ck with.

For some (possibly most) people, this isn't a difficult quandary but I am finding myself quite perplexed. I'll never have a chance to see the King of Pop in my lifetime -- even if the speculated Jackson 5 reunion tour takes place and I manage to get tickets, there is no way it could hold a candle to the performances of MJ's heyday. An awesome cover band is probably the closest I'll come to living the dream.

And then there's the Clan -- missing one of it's major members (RIP ODB), one could argue they are also past their pinnacle (which I also missed). But legendary names like RZA, Method Man, Raekwon and Ghostface do not equal a bad show; add the competing egos to the equation and it's doubtful there will be many opportunities to see the group on tour in the future.

Unfortunately, I'm a bit tapped out at the moment, making the decision to forgo the $40 Wu ticket much easier. I guess the whole world had to answer right now just to tell me once again, Who's Bad.
Posted by OMG, It's Becky! at 1:09 AM No comments:

Sharon Jones and The Dap Kings in Orlando

This Monday, Sharon Jones and The Dap Kings will be celebrating Martin Luther King Jr. Day at The Social in our fair city. 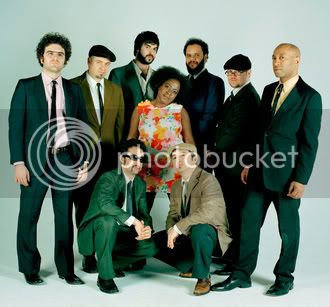 I was fortunate enough to catch their last Orlando show in February of 2006, before the release of 100 Days, 100 Nights and prior to The Dap Kings backing Amy Winehouse on her Back to Black album. The eight-piece band is enormously versatile, ranging from the mellow doo-wop of Winehouse to the explosive funk accompanying Sharon Jones' legendary voice. On stage, the singer is a colossal ball of energy, making the ensemble nothing short of mind-blowing. This is definitely a performance you don't want to miss!
Posted by OMG, It's Becky! at 6:57 PM No comments:

Labels: Sharon Jones and The Dap Kings, the social

Tonight in Orlando - MOT and Becky

It's been much too long since a proper update, but I'm back to annihilate in 2008! There are plenty of noteworthy happenin's on the horizon and to massage my ego a bit, I'll start with TONIGHT at Sky60. For the first time ever, I'll be DJing with one of my greatest local idols, Mr. MOT himself. The password for free admission is "Adam vs Eve" and of course, since the venue is outside, the whole thing is dependent upon good weather.
Posted by OMG, It's Becky! at 6:16 PM No comments: