New Year’s Eve in upon us, which is usually hit or miss in our beloved Orlando. There’s plenty going on at the theme parks, Wall Street and Church Street, but here at Don’t Sleep Orlando, it’s our jobs to bring you the alternatives to such events.

And after a few hours of scouring the internetz for some decent NYE parties, the pickins appear to be slim this year. I’m going to chalk it up to procrastinating on the part of clubs and promoters, although the super-mega-shiny-shirt clubs downtown seem to have their act together.

Anyway, without further adieu, here is what’s on this New Year’s Eve in Orlando:

Don’t Forget with DJs Andrew Spear, Mot and Ken Sherry
Best for: The old Knock Knock crowd, fans of Jaegermeister
Details: This trio of DJs doesn’t disappoint and their music selections include everything from house, funk and disco to rock, electro and hip hop. Plus, they’re all a bunch of drunks (in a good way) so expect late night rantings on the microphone, plus Jaeger-fueled shenanigans.
Where + How Much: Peacock Room, $10
What’s in it for me? Free champagne toast at midnight

Red and Black Party with DJ Secret Weapon and guests
Best for: Beer enthusiasts, the indie crowd
Details: The FB invite leaves much to be desired and Redlight Redlight doesn’t even have a freaking website. Seriously?? But DJ Secret Weapon (aka Calvin from Park Ave CDs) has awesome taste in music, although it would be nice if he let the songs play a little longer before mixing them out. Just sayin.’
Where + How Much: Redlight Redlight, Cover charge TBD
What’s in it for me? Forget Miller High Life. Toast 2011 with DeuS -- the literal champagne of beers. 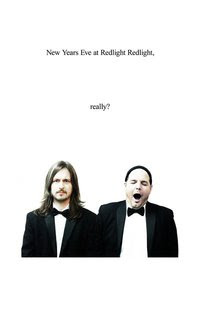 James Bond New Year’s Eve Party: Dress to Kill
Best for: Secret agents, Bond girls and Villains
Details: Unleash your inner Goldeneyes and Octopussys for this annual themed party at The Enzian. The Bond movie Thunderball will be showing outside the Eden Bar at 8PM.
Where + How Much: The Enzian, Starting at $25
What’s in it for me? Hot Bond guy/ Bond girl eye candy, Shaken or stirred drink specials and Enzian Film Society Members receive one complimentary espresso vodka cocktail. 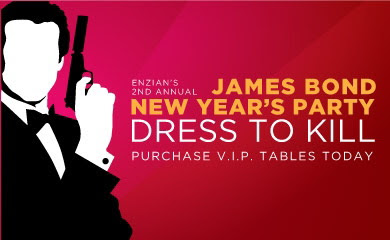 New Year’s Eve Prom Night
Best for: 80’s fans, People who missed their high school dances
Details: Ah, the 80’s prom theme. Will it ever die? Not likely, as this is the third year in a row for IBar’s NYE Prom. So dust off those taffeta dresses and ruffled tuxes, it’s time for prom! (Again.)
Where + How Much: Independent Bar, 21+ $10 cover, 18+ $15 cover
What’s in it for me? Half price admission if you get decked out (we want to see elbow-legnth gloves, ladies!) and $1 Heinekens until 11. 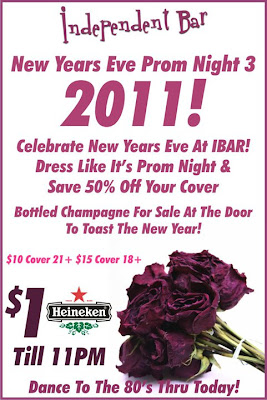 Late Night New Year’s Eve Bash
Best for: House-heads, club kids, people who want to party until 3AM
Details: The untz untz beats will be thumping at the Cameo Theater when Pitchverb, Just Jason, Joey Paranoia, Romano Arcaini and Megan Lyons take over for the night.
Where + How Much: The Cameo Theater, 21+ $10 cover, 18+ $15 cover
What’s in it for me? Free champagne at midnight 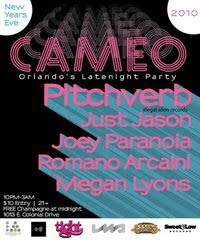 Hopefully something from the above list tickles your fancy this New Year’s Eve. If not, check out one of our favorite neighborhood bars below who didn’t bother to list their festivities online:

Good luck and have a safe and happy New Year’s Eve!
Posted by OMG, It's Becky! at 7:37 PM No comments:

What’s up, kids? Yeah, it’s been a minute, but to quote the lyrical stylings of a Mr. Cool J, “Don’t call it a comeback, we’ve been here for years.”

What’s new with me, you may be wondering? Well, I’ve been lucky enough to travel around the world with my jobby-job (including living in Finland for the last three months) so I’ve been a busy bee. I never did forget my beloved Don’t Sleep Orlando, though, especially every time I had to pay for the domain name.

So, long story short, we’re back. I’ve found a new partner in crime to help me update these lovely event listings, so you can expect much from us in 2011. Announcements and introductions coming soon and we hope to have a comprehensive New Year’s Eve post up early next week, so stay tuned.

But all this is not why I’m here. It is with a heavy heart that I bring news of a well-loved, downtown Orlando bar’s closing. Known for the iconic fried pickles, tater tots, po boys, 25 cent wing nights, and Orlando’s best bartender, Dan the Man, Crooked Bayou, one of our favorite spots, has been sold.

In its place, a new BBQ joint will be moving in, and word on the street is they want to keep the status quo – same staff, same DJs, same venue. Supposedly only the menu will be different, but with new ownership, who knows what will happen.

In the meantime, let’s drown our sorrows with one last hurrah this Thursday night. The annual holiday party put on by Hoochie Productions (always a major bash in itself) is being rebranded as the Official Crooked Bayou Closing party. (It pains me to even type that. I still don’t want to believe it’s true!) I can’t think of a better party to thank Crooked for their last 15 years of service to Orlando. Get more info at Hoochie Productions’ website or the Facebook invite. The full menu goes until midnight, so have a Danimal and a Grand Slam shot for old times sake. 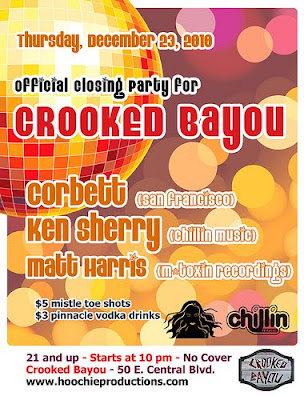 We’re looking forward to whatever future ventures the Bayou staff is involved in. There are rumors of a sandwich bar opening soon in the Milk District. Stay tuned.
Posted by OMG, It's Becky! at 6:50 PM No comments: