Fall is here (even if it doesn't quite feel like it yet) and besides the insane amount of pumpkin bombs I'll be enjoying for the next couple months, I'll also be reaping the benefits of the onslaught of incredible touring acts making their way through town. Here's my Top 5 ... Becky will be posting hers later this week, plus check out the column on the right for even more listings.

Mates of State, The Social, October 7
It’s been a not-so-secret goal of mine to marry a musician babe and tour around the country with our daughters in tow like Kori Gardner and Jason Hammel of Mates of State do. They’re out in support of their seventh album, Mountaintops, which is more guitar-heavy than previous releases (which used to be just drums and keys), but it's still just as upbeat and melodic. Expect lots of pretty people and tambourines. 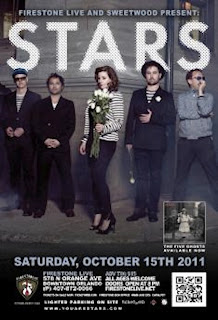 Stars, Firestone Live, October 15
Last year I drove to Atlanta to see this band of Canadians (half of them also play in Broken Social Scene), because I thought, "Oh they'll never come to Orlando." Well, here they are, less than a year later, touring in support of the same album (Five Ghosts). This means they’ll likely play the same set I saw last year which doesn’t really bother me one bit because they are one of the most hauntingly beautiful bands I’ve ever seen.

Butch Walker & the Black Widows, The Social, October 31
He was a one hit wonder in the 90s (Marvelous 3, anyone?) and now he's more banjo than bad-ass, but I still have a really strange crush on him. If you go to the show you’ll see why, or just think I have weird taste, but whatever. Butch is on tour with his folk backing band, The Black Widows, promoting the release of their brand new album, The Spade.

M83, The Beacham, November 2
Turns out I’m not going to be in town for this show, but I’m still so excited about it for your sake that it had to be included. Hurry Up We’re Dreaming is my favorite new album of the year, and I’ve never seen M83 live, so someone needs to go and tell me how it is. Okay now I’m sad.

Orlando Calling Festival, The Citrus Bowl, November 12
I realize this first-ever festival has the potential to be a giant, shitty mess -- annoying crowds, expensive beer (may I suggest a flask?) -- but this is The Killers’ first show on U.S. soil in more than two years, and there’s a bunch of other excitement-worthy acts on the bill (The Avett Brothers, The Roots, Gogol Bordello) that may make this worth it.