This Weekend: Stars at Firestone 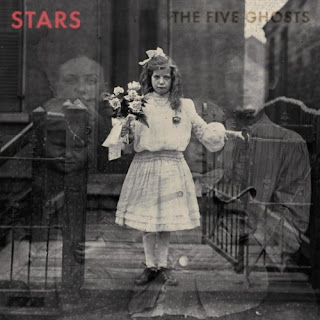 My favorite Canadians are going to be in Orlando tomorrow night, headlining Firestone Live, or Club Firestone, or just Firestone – whatever they’re calling it now. Anyway, I’m stoked that I getting to see Stars twice in the past year: their live show is one of the best. If you like indie rock (think Broken Social Scene, which all of the members of Stars are also are a part of) and melodramatic, theatrical songs about ghosts, love and heartbreak, then you’ll be into this show. I promise. Tickets are $15 and still available. (Plus, no fees if you buy them at the Firestone box office!)

I got to talk with Amy Millan, Stars’ babe of a co-lead singer, about the new tour, plans for future music, and what’s on her playlist. Check it out!

You toured last year in support of Five Ghosts, and since then you've released The Bedroom Demos, the demos from 2007's In Our Bedroom After the War. What can expect to hear most of on this current tour? A good mix of old and new?

It’s interesting having five albums and four EPs -- there is SO MUCH TO CHOOSE FROM!! For our own sanity we need to mix it up and challenge ourselves for every new tour, which means the setlist is always a mixed bag. We always want to make sure we are playing some fan favorites because the fans are the ones buying the tickets and we wouldn't want to disappoint. Playing the favorites always means we get a sing along as well, which is the very best of anything.

You and Torquil (fanciest name ever) split most of the band's vocals, is the band's songwriting also a collaborative process?

All publishing is split between the five of us on every song – that’s how collaborative it is. No song would be the song without every member present.

Are there any current plans to record new music in the future?

YES! We are in the middle of recording and writing the next album, and we are actually playing some of the newest and freshest tunes on this tour. It’s terrifying and exciting! We have never played songs that have yet to be even finished before.

What's on your playlist right now?

Do you have a favorite place/ or is there anywhere you're looking forward to visiting while you're in Orlando?

Well, we just made it to the beautiful beaches of Florida and we are LOVING IT!
Posted by amy c. at 7:27 PM